The 8 Fold Path of Yoga

The 8 Fold Path of Yoga

Seltenly mentioned in Yoga classes is the philosophy behind Yoga. The “Yoga” that most of us all know and love is only one small part of the Yoga Path. Patanjali’s 8 Fold Path or 8 Limbed Path is progressive beginning with the Yamas.

If I could only have ONE Yoga book, it would be… 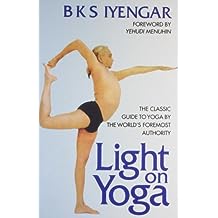 The Stages of Yoga, as well as a beautifully straight forward overview of the philosophical side of Yoga, are among its vast realm of information. The book is filled with hundreds of photos of precisely executed Asanas. Some are suitable for beginners, as well as many advanced Asanas and Pranayama exercises. Here’s a link if you’d like to check this out on Amazon.com. It is still reasonably priced. I got mine used for around $15.

Patanjali’s Yoga Sutras are also explained here in depth. Nothing is left out, The Bhagavad Gita, the Upanishads.

Depending on who you ask, there are 5 or 10 Yamas. Wikipedia lists both.

The five Yamas listed by Patañjali in Yogasūtra 2.30 are:[11]